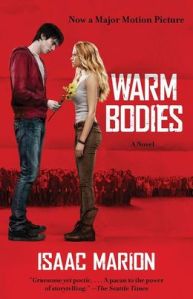 Relationships can be so difficult…especially when you’re a zombie.

In an attempt to please the wife of my youth, I went to see Warm Bodies, a paranormal romantic zombie comedy narrative film based on Isaac Marion’s 2011 novel.  With a name like Warm Bodies, I was afraid that it would be filled with sexually explicit scenes requiring me to leave before the movie was complete.  However, after seeing that every other movie showing was rated R,   I reluctantly agreed.

Here’s a brief synopsis of the movie:

R is an oddly introspective zombie who spends his days wandering around the Toronto Airport.  His best friend is M, although he’s never called him by name.  R and M only communicate with grunts and moans and occasional words.  R, like all of his fellow zombies, feeds on human flesh.  He especially enjoys eating brains, because it allows him to experience the memories of the one that he is eating.

Julie lives in a walled off area of Toronto with the rest of the city’s human population.  She and her friends are sent out by her father in order to recover medical supplies from an abandoned hospital.  Suddenly, R and a group of zombies attack Julie’s team.  R sees Julie and instantly falls in love with her but is then shot by Perry, Julie’s boyfriend.  In return, R kills Perry and eats his brain, which gives him Perry’s memories, increasing R’s love for Julie.  R then rescues Julie and brings her to his home, an abandoned airplane.  The two become friends and R slowly begins to come back to life.  The effect is contagious and soon other zombies begin to show signs of humanity.  R and Julie’s relationship becomes more romantic as he becomes more human and the two find themselves caught between the paranoid human forces and the bonie zombies, virtually skeletal demons, who are out to destroy the zombie human restoration brought about by R and Julie’s relationship.  With M’s help, R and Julie must find a way for the “regular” zombies and the humans to first join forces against the bonies and to then create a new zombie/human friendly society. 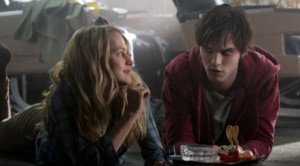 How often has a zombie been the hero in a love story? R’s quirky sense of humor throughout the odd circumstances is part of what gives this movie its charm.  His inner dialogue shows throughout that he really is human at heart. Even as a romantic comedy, Warm Bodies does contain violent scenes, mostly involving zombies’ dining habits, so viewers should be prepared.  There is also the one unmentionable profane word that seems to be in most PG-13 movies nowadays. Fortunately, there’s enough humor to take the bad taste out of your mouth. 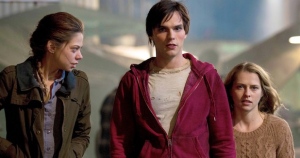 Warm Bodies actually could have a parallel in Christian circles.  The humans living inside the walled city could represent Christians separating themselves from the world thereby prohibiting the zombies, or lost people, from the only connection that’s going to allow them to really live.  I suppose the bonies could represent Satan, doing whatever is possible in order to keep this eternal restoration from taking place.  If you look at it from that point of view, Warm Bodies could be a great conversation starter when sharing Christ with a friend. Then again, it could just be your typical paranormal romantic zombie comedy narrative film.  Anyway, I liked it.

Other reviews by John J. Frady