Even though I had never heard of the movie or the book, a few months ago, I took my wife to see the movie adaptation of The Hunger Games by Suzanne Collins.  A few weeks later, while on a mission trip in Haiti, I overheard a missionary tell a friend that she was completely fascinated by the book.  Then, while at a Christian Writer’s Conference, The Hunger Games was praised by several of the guest lecturers as the ultimate example of contemporary quality fiction.  Finally, after a pastor friend of mine shared with me about his extreme interest in the book, I was intrigued enough to read it for myself.

A Brief Summary of The Hunger Games

16-year-old Katniss lives with her mother and little sister in district twelve of Panem, the remains of futuristic North America.  Years earlier, the twelve districts waged war on the wealthy Capitol and were soundly defeated.  As a reminder of the follies of rebellion, each district is required to send two tributes, one boy and one girl, to participate in the Hunger Games, an annual televised event.  Each year, the setting for this ultimate Survivor type show may change, but there is one constant:  It is an all out fight to the death between all twenty-four tributes.  When her sister Prim is selected by lottery, Katniss volunteers to go in her place. 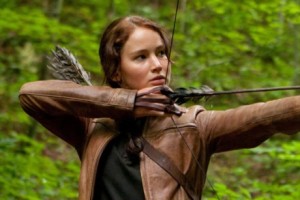 Because of the violence within the book (and movie), one might think that Suzanne Collins is glorifying violence. In fact, the opposite is true. Throughout the story, she raises serious questions about our culture’s obsession with violence and death and what that obsession has done to the hearts and minds of our society.A popular movie (VHS Rental) when I was in high school was called Faces of Death. It was released in 1978 and guided viewers through explicit scenes depicting a variety of ways to die.  Even though it was banned in some areas, it was successful enough to produce at least three sequels.

It’s not all that different from Spike TV’s 1000 Ways To Die, a contemporary spoof show which shows people making stupid decisions which causes their ultimate demise. Here’s an excerpt from an online review of the show:

Amidst a number of shows which try so hard to be cerebral and generally expose themselves as fraudulent, 1000 Ways to Die is an odd breath of sincerity; sincerely stupid and ridiculous, but refreshing. Each show is a collection of ‘shorts’ wherein someone dies, usually in an unusual way. The acting is atrocious. The special effects are mediocre. The narration is often funny. And each scene concludes with a ‘title’ for that death, which is usually a pun. In my opinion, it’s the funniest bit of the show, and you’ll probably find yourself trying to guess what the death will be ‘called’ before it appears on screen.

What have we become?  What sort of culture uses violence as a form of amusement? Although she uses violence to make her point against our obsession with violence (sort of like naked people boycotting pornography), Collins makes her point when all is said and done.

Click on the link below to watch a brief interview segment of Suzanne Collins discussing violence desensitization:

In the end, The Hunger Games should help us examine how we view violence and death. Is it simply entertainment to us? Have we lost touch with reality by watching Kenny die at the end of every episode of Southpark? I’m not sure. I suppose that one could argue the same about the Bible. It is filled with violence. But those of us who have a relationship with God know that God’s character is not one of violence.  Psalm 11:5 states that The Lord examines both the righteous and the wicked. He hates those who love violence. I don’t know about you, but I don’t want the Lord to hate me.

So, if you’re on the same journey as I in trying to make sense of our culture’s obsession with violence, pray for me and I’ll pray for you.  Oh yes, and may the odds be forever in your favor.

7 thoughts on “The Skinny on the Hunger Games”