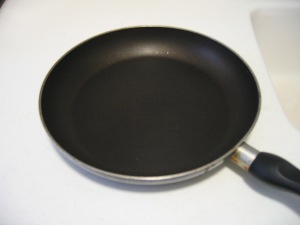 There I was, relaxed in the recliner, watching a Christmas special on television, when she angrily stomped past me without a word and disappeared into the kitchen. Within seconds, my three year old sister was back holding a frying pan with both hands.

“Do you see this?” she cried out before she began swinging it viciously at me.

“This will teach you!” she screamed as she tried once again to hit my head with the frying pan.

I managed to dodge her efforts once again then quickly snatched the frying pan from her hands.

She lunged at me, so I dropped the pan and grabbed her hands before they smacked into my face. Since I was 14 years older than she, it was easy for me to pick her up, carry her to her room, toss her onto her bed, and hold her door shut.

She hated that even more, so she beat on the door, kicked the doorframe and screamed (quite loudly).

I finally released the door, but she didn’t know because she was still throwing a fit. I went back to the living room and continued watching my show, that is, after I placed the frying pan on top of the refrigerator.

Later, when she calmed down, I discovered that I had said something upsetting to her hours earlier and while had forgotten and was watching television, she was in her room festering. I apologized and she forgave me, but I left the frying pan on the refrigerator just in case.

There were 3 lessons I learned that day (although I still relearn them to this day):

And if necessary, hide the frying pan until the relationship is restored.

December 3, 2014 by johnfrady Categories: UncategorizedTags: Ephesians 4:32, forgiveness, Frying Pan, Matthew 5:23-24, overlooking an offense, Proverbs 15:1, She Came At Me With The Frying Pan 2 Comments