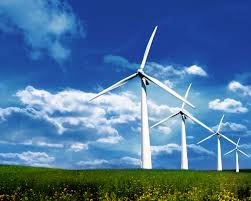 Wind farms like these are on the rise around the world and are now used to produce almost 3% of the world’s energy usage.  You may have seen a similar farm in your travels.

Have you ever wondered how these windmills are able to capture the wind’s energy?  Here’s a brief explanation:  A wind turbine blade works like an airplane wing.  Blowing air passes around both sides of the uniquely shaped blade.  The uneven pressure around the blade then causes it to spin.  The blades are attached to a shaft, which turns about 18 revolutions per minute, which doesn’t seem like much at first.  However, the shaft is connected to a series of gears, which increases the movement to about 1800 revolutions per minute.  At that speed, a generator can produce a lot of electricity as long as the wind is consistent.

Recently, when I was thinking about wind farms, tithing came to mind.  This may seem strange so I’ll explain myself.  People often think that they can’t give much money, so why should they even bother tithing.  Like the large shaft that only turns 18 times a minute, they think that their gift is not making much of a difference.  Fortunately, God blesses the offerings given by individuals and allows the church to connect it with the gifts of others, multiplying it in various ways that is then able to produce amazing results.

The secret is faithful and consistent giving.