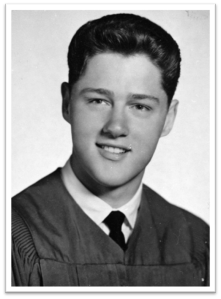 I first met Bill Clinton when I was a freshman at Foreman High School in Arkansas.  Mr. Traywick, our Civics teacher, took the entire class to the Arkansas State Capitol Building where we observed legislative government in action and had the opportunity to meet with Governor Bill Clinton.  Even at that age, I remember how pleasant and personal that he was.  He took time to greet each of us and even complimented one of my friends on his shirt.  At the time, none of us knew that he would one day be the 42nd President of the United States.

I also had no idea that he had gone to college at Georgetown in Washington DC.  I recently read a great account of his time there.

According to President Clinton’s autobiography, My Life, there was one time while he was in college when he was desperate for money because of his stepfather’s illness.  At just the right time, he was offered his choice of a part-time job for $3500 or a full-time job for $5000.  Always a quick thinker, this charmer from Arkansas smiled and asked, “Can I have two part-time jobs?”

I never voted for Bill Clinton, neither for Governor nor President.  However, I can’t help but admire the man who is so extremely personable.

One thought on “My favorite thing about Bill Clinton”